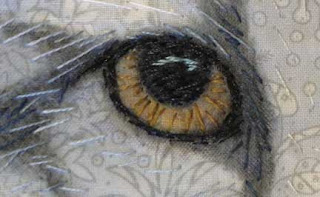 My first completed project this year is for the 2012 Quilting Arts Calendar... might as well try for three years in a row! The theme is Feeling Pet-ty, in other words animals, a lifelong favorite subject of mine. The previous entries had fairly bright colors but the subject this time called for a much more subdued palette. I had not used watercolor pencils on fabric before, but because they are transparent and the idea was to allow the patterning on the fabric to show through, wc pencils had potential. 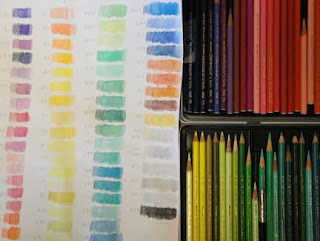 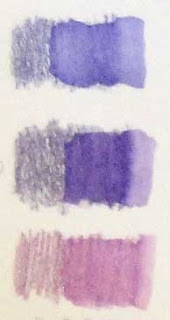 First, a little organizing was in order. These pencils date from a book project eons ago and were scattered about in various nooks and crannies of my studio. After corraling them into a semblance of order, a coloring chart became essential because of the nature of wc pencils. It’s very hard to tell just looking at the pencil what color it really is.
As you can see on the left, the colors change drastically when water is added.
Because I was not going to use plain white fabric, the pencils would be interacting with the underlying color and/or pattern. The fabric needed to represent the fur of my critter, without getting literal, necessarily. Below are the four contenders:

The one on the left was a possibility, the next one was too spotty, the next one too contrasty... the one on the right with it’s pattern of leafy, woodsy imagery seemed most promising. So, I scribbled on some colors (below) and brushed over them over with water. So good so far, time to jump right in.

The sketch was done in Photoshop, won’t get into the details of that now. Once it was printed out, I redrew it onto tracing paper. Someone had asked me awhile ago about my unusual method of transferring sketches, so here are some photos. The tracing paper sketch is on top, and I just draw directly on the fabric underneath. The pencil point is visible through the tracing paper. 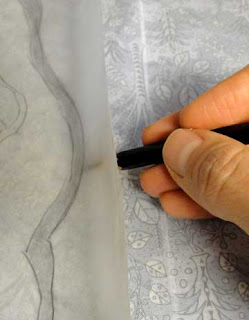 I roll back the tracing paper often to see how it’s looking. 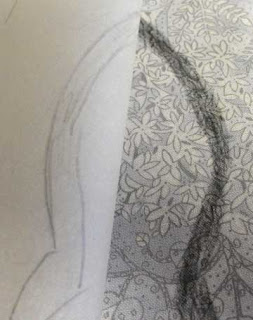 Also, it’s easy to see through the tracing paper where the pencil is because it is darker. 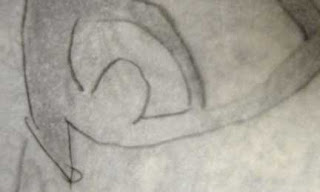 This method isn’t suitable in every situation, but because I was using a dark wc pencil and a thick line, it worked fine. Why not use transfer paper such as Saral? I do on many occasions, but this works just as well for me and there are no worries about a Saral line ending up in the wrong place and being tough to remove. How about a light box? That’s a good option if the base material is see-through enough. But, if you’re transferring a sketch to primed canvas (for example), a light box won’t work.
Below is the colored line before and after being washed over with water. Quite a difference! You can always add additional layers of the pencil, if needed, after the fabric is dry. Or, you can use the pencil on wet fabric, which really lays down pigment but may be a tad less controlled. By the way, in this case the amount of water being added is just sufficient to melt the wc pencil, not saturate the surrounding area.

How about setting the wc pencil? I tried ironing it, which didn't seem to do anything much. A wet tissue dabbed onto the pencil work is an easy test of whether the pigment is set or not. Painting on thinned acrylic gel, textile medium, or Jacquard colorless extender (tutorial with wax pencils here) probably would have worked but since quite a bit of the image was involved, there was too much territory to cover. Instead, it was sprayed with two coats of Claybord matte fixative. This is the main fixative I use, because it has a relatively low odor that dissipates quickly. As you can see from the eye detail at the top of this post, there was another whole layer of stitching to add, so I didn’t want pigment from the pencils to get all over the threads or have to keep smelling a noxious odor. The other advantage is that is doesn’t stiffen the fabric much, if at all.

The watercolor pencils gave me the soft look I wanted, so that was the main thing. Wondering what this animal is? If it doesn’t get into the calendar, I’ll reveal all in a couple of months. If it does get in, I’ll post more about this project closer to the calendar’s release date.
Happy New Year, everyone!

Here through the artquilt digest - this is amazing! Thanks so much for showing us your technique.

I have some watercolour penicls in storage somewhere - time to dig them out!

Very nice! Love the translucent effect. Thank you for sharing "how" you did this too. I've used Derwent Inktense pencils on fabric, added water, and then ironed to heat set the color. Works very well, but I've wanted to try using other wc pencils that can't be heat set. I will use your method...should work perfectly.
Thank you!

Thanks, the information is very well done. Love the effect and the choice of patterned fabric. Color your own, and pattern too, best of both worlds.
Nancy

Thanks, guys, glad you enjoyed reading it.

I should add re “setting” the pencils, that washing the fabric might be too much for the Claybord fixative. So, definitely test first if using on washable item.

ooooooo can't wait to hear that you are in again....just know you will be!!
ANTICIPATION!!!!

What a great tutorial for WC pencils on fabric. Thanks! This gives me the confidence to try it out.

You handle those watercolor pencils like a pro. Thanks for sharing so many techniques. I have these pencils, too, and I've only played with them on watercolor paper. Can't wait to try them on fabric -- you've inspired!

Oh, it looks lovely, Loreen! Hope you get in again this year. I just love your work.

Thanks for sharing this info about your materials and techniques. I have only used the watercolor pencils and Caran D'Ache crayons for adding details, so this was very interesting. The combo of the wash of color with the designs in the fabrics is wonderful.

You've just given me an idea. Thanks for sharing your technique.

Thanks for all the great comments! I had a feeling my fellow fabric artists would enjoy this technique. It has a lot of potential... I've been eyeballing my collection of black and white prints, too.

Loved the tutorial. I especially like how you see the fabric through the watercolor pencil. I will definitely try this.

That eye is a cat's eye?

Marvelous results! I love how fabric can be altered with WC pencils. The white is purrfect:)

Actually, it's not a cat. But it is a mammal.

Good luck with your entry! I planned on entering this year but missed the deadline..... you can see my almost entry here..
http://judyalexander.blogspot.com/2011/01/missed-deadline.html

This is super cool! Thanks for walking us through how you did it. I really love how you used a patterned fabric as the "canvas", it adds and fantastic texture.